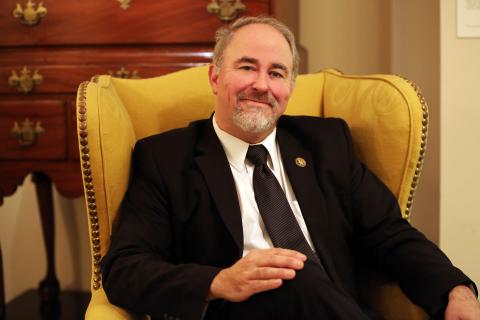 David Allen Lambert has been on the staff of American Ancestors/NEHGS since 1993 and is the organization’s Chief Genealogist. David is an internationally recognized speaker on the topics of genealogy and history.

Lambert has published many articles in the New England Historical and Genealogical Register, the New Hampshire Genealogical Record, Rhode Island Roots, Mayflower Descendant, and American Ancestors magazine. He has authored and or co-authored in the published genealogies presented to David McCullough, Ken Burns, Angela Lansbury, Michael and Kitty Dukakis, Nathaniel Philbrick, Doris Kearns Goodwin, and Boston Mayor Thomas Menino.  He has also published eleven books including A Guide to Massachusetts Cemeteries (NEHGS, 2018), and Vital Records of Stoughton, Massachusetts, to the end of the year 1850 (Massachusetts Society of Mayflower Descendants, 2008). David received his B.A. in History from Northeastern University. David is an elected Fellow of the Massachusetts Historical Society in Boston, Mass., and a life member of the New Hampshire Society of the Cincinnati and the General Society of the War of 1812. David also serves as the tribal genealogist for the Massachusett Tribe at Punkapoag in Massachusetts.